The mega-snowstorm that was moving across the Eastern seaboard was an enormous tease here in the DC area — or at least in our neck of the woods, just northwest of the District.  We went to bed with flurries snuffling around, but no snow on the ground, and awoke to find only a few dry inches blowing around.  I went out at 6 a.m. to shovel and salt our driveway — a 50-yard slab of asphalt that slopes down onto a state highway.  It took about 30 minutes, but things were looking good.

Then the snow really began.

Starting at 6:45 or so, the snow started coming down in heavy slants — at times it looked like it was coming down sideways — quickly covering everything back up, and dumping another eight inches of heavy white stuff in just under two hours.  It came down so fast that the main road through our little town — a state highway that serves as an official Snow Emergency Route — couldn’t be cleared fast enough.

When I finally revved up the Jeep (smugly engaging its four-wheel drive) and headed out the door for Rockville at about 8:30, things weren’t looking much better.  Here’s Main Street in Damascus, Maryland, through the windshield of my Jeep: 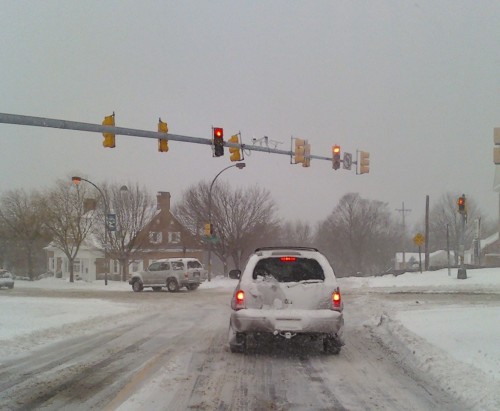 So much for the Snow Emergency Route.

Anyway, I applaud my fellow Marylanders for their snow savviness — I saw only one spun-out car, and no accidents during my 16 mile commute.  Well played, Merrylanders.

So, while we’re slowed down in the area, we’re not stopped — which meant Barb could drive off into the snowy sunrise this morning to start a brand spanking new job today.  After spending the last few years working in a government lab, then serving a year as a science advisor to a Congressional committee, some wise international sciencey-type firm was smart enough to recruit her for a director’s position.   She’s — we’re — incredibly grateful and fortunate that in this tough economy, she’s actually moving upwards to bigger and better things — including, to her delight, international travel — and I couldn’t be prouder of her.

In other news, the snow also hasn’t been enough to close the airports and prevent me from getting on a plane tomorrow night to meet Agent J out in LA — in Hollywood, actually —  for a conversation on Wednesday with someone rather cool, regarding a fun potential project I’ve taken to calling Project Blue Harvest.*  More to come this week.

*  If you get that joke, you are a true geek and can hang with us at Roscoe’s Chicken & Waffles tomorrow night.  And no, it doesn’t really have anything to do with the potential project we’re discussing.

This entry was posted in California here we come, My sympathetic agent, snow, works in progress. Bookmark the permalink.