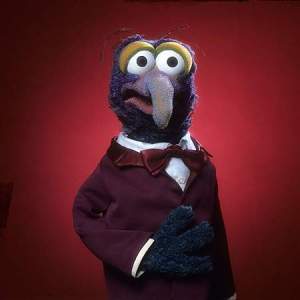 When I left for Los Angeles two weeks ago, my original schedule—as I think I reported in these pages a few entries back —was going to be a bit of a whirlwind: I would be arriving at LAX at 11 a.m. Tuesday morning, which gave me just enough time to rent a car, check into my hotel and grab a bite to eat before I headed over to the Jim Henson Company to meet with Lisa Henson in the afternoon. Early Wednesday morning, I was going to drive to Burbank to meet with Muppet performer Dave Goelz, who had been scheduled to work all Tuesday evening on a Muppet-related project, but had graciously offered to give me a few hours the next morning before he caught an early flight back home. I would then drive back to LAX, return my rental car, and catch my 3 p.m. flight back to Baltimore. That was the way it was supposed to work, at least.

That didn’t happen.  And yet, things couldn’t have gone any better.

The even greater Dave Goelz.

After checking into my hotel, I did what most of us do the moment we settle into the room: I plugged in the laptop, grumbled a bit about having to pay for wireless service, then logged in to check my e-mail.  There I found waiting for me a message Dave Goelz had sent while I was still on the plane that morning, apologizing that he had run into an unexpected schedule change. “Tuesday we expect to shoot until about 2 a.m.,” he wrote, and explained that he was concerned he would be too sleep-deprived to participate in a worthwhile interview the next morning.  However, he continued, “I’d love it if you could come to the studio to do the interview. We’re shooting a music video with OK Go…” Attached at the bottom of the message was a map to Delfino Studios in Sylmar.  “Hope you can make it.” Dave said.

Make it? Are you kidding?

As it turns out, the band OK Go had recorded a version of the theme from The Muppet Show for The Green Album, a new collection of Muppet-related covers—and the Muppets, naturally, would be a major part of their music video. The Muppets and the video-savvy OK Go together? There was no way it couldn’t be a lot of fun.  Knowing he was already at the studio working and therefore unable to check e-mail, I tapped out a text message to Dave telling him that I would love the chance to watch him work, and asked if I could meet him at 7 p.m., after I finished my meeting over at Henson Studios. Dave responded almost immediately: “Xlent.”

I kept my appointment with Lisa Henson—who was as warm and gracious and thoughtful as always—then as the clock neared 6 p.m., I pointed my Kia Soul (what the heck?) in the direction of Burbank. A little after 7 p.m., I pulled up at Delfino Studios, a compound of several connected warehouses just outside of the city.  I managed to luck into finding a producer on a break out in the parking lot, who kindly steered me through a maze of outer rooms and into one of Delfino’s dark, cavernous main studios.  There, in the middle of the room, under an enormous glare of lights, the members of the band OK Go were patiently resting their heads on the top of a long board, waiting for the music to begin as the crew buzzed around them.

Trying to stay out of the way as much as possible, I climbed into a canvas chair in a cozy seating area that had been set up off to one side, an assortment of chairs and sofas arranged around several flatscreen monitors where we could easily see exactly what the cameras were filming. As playback began over the studio speakers, the band began to lipsynch to themselves singing The Muppet Show theme—and as they finished the verse, up popped Marvin Suggs to pound on their heads with his Muppaphone mallets.  My mouth hung open. “OMG,” I texted to my wife, “I JUST SAW MARVIN SUGGS!” (Her response: “MODULATE!” I do love having a pop culture-savvy spouse…)

After another hour of filming—where I watched lead singer Damian Kulash repeatedly smash into, then peel his face off of, a piece of plexiglass as he and the Muppet performers attempted to get the timing just right on a series of quick head turns—Dave Goelz climbed off a ladder where he had been performing Gonzo and we were finally able to grab some time to speak in a quiet side office.

An hour later, a technician came in to call Dave back to the set. Dave cheerily pointed a finger at me. “Let’s keep talking!” he said. “Don’t go anywhere!” Believe me, there was no chance that was happening.  For another hour I stood to one side as Dave laid on a rolling cart with Gonzo, reacting goofily as a Muppaphone mallet was thrown into a pyramid of inverted trash cans, sending a bucket swinging toward the camera.  As it struck a Muppet chicken, a blast of compressed air blew a handful of feathers skyward.  (“Whoopeee!!” cheered Gonzo in several takes.) The director finally decided everyone had nailed it, and back Dave and I went to talking, taking a slight break to eat dinner on the set around 11 p.m. 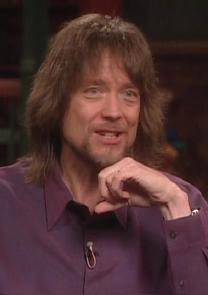 At one point, Steve Whitmire—who’s performed Kermit the Frog since 1990, and who I had the pleasure of speaking with in Atlanta earlier this year—circled around us several times, then came over, smiling, to shake my hand. “I thought I recognized you!” he said as he clapped me on the shoulder.  Man, the Muppet performers are all such genuinely nice people.

Well into the early hours of Wednesday morning, Dave Goelz and Steve Whitmire sat just out of the camera’s eye, performing Statler and Waldorf, first with Kulash, and then by themselves. They worked without a script, preferring to ad lib their dialogue, cracking each other up, and laughing in character. After one particular take, director Kirk Thatcher laughed out loud. “That was great!” he called out, “Let’s cut!”

“No, it wasn’t great,” Whitmire said.  “We need something else.”

“I got it! I got it!” said Goelz, and as cameras rolled again, the two of them worked their way through several more jokes until both were happy with it.

As I watched these two old friends work together—two men who had known each other for nearly thirty-five years, and who knew each other’s rhythms so well they could hit all the beats of an ad-libbed routine perfectly— I was struck by just how fortunate I am to be a part of their world, if only for a moment.  To call it awe inspiring doesn’t even begin to do it justice.

I closed my night–or morning, rather, for at this point, it was approaching 3 a.m.—listening to Dave speak fondly of friends and coworkers, many of whom are long since gone. After we finished, as I got up to go, he took my hand in both of his and shook it warmly. “Thank you for letting me talk about Jim,” he said. “It’s been a real privilege.” That choked me up; as I said earlier, the Muppet performers are all such warm and generous people. It was all I could do to stammer that the privilege was all mine.

And it truly was.

And now, here’s the video I had the thrill of watching Dave Goelz, Steve Whitmire, OK Go, and the rest of the talented Muppet performers make in that warehouse studio in Burbank:

(My thanks to Dave Goelz for inviting me to the set — and to the members of OK Go who graciously permitted me to stay there.)