Your Moment of Zen 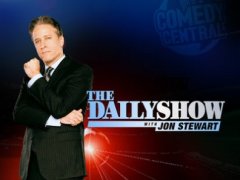 Only a little more than two weeks ago, I received word from the publicity team at Random House that it was “extremely likely” that I would be booked for an appearance on The Daily Show with Jon Stewart to talk about Jim Henson. My chin hit the floor as David Moench, the publicist assigned to me at Random House, told me the news. I think I responded with something clever like, “Gwah?” “Congratulations,” David told me, “but don’t get too excited yet. Until we get official confirmation, things could change.”

Well sure. After the constant scheduling and rescheduling of the Today show, I wasn’t going to get my hopes up and get stung again (though I should add that the Today show will, indeed, now happen). But there was another problem, too: the date The Daily Show was setting aside was Thursday, October 10 — the same day I was scheduled to appear at the New York Society Library. That event was scheduled to get underway at 7 p.m. — and if things went as planned, I wouldn’t be getting out of The Daily Show until that same time. We went to the NYSL, hat in hand, to see if we could get the start time pushed back even 30 minutes, though the mechanics of getting me across town at that time of night were going to mean cutting things very, very close. Unfortunately, none of us could figure out how to get it to work, and Mark Bartlett and his staff at the NYSL were incredibly generous — and very understanding — and graciously offered to reschedule the NYSL event for another time.

On October 1, then, came the word we (meaning me and David and the publicity team at Random House) were waiting for: I had been officially confirmed. The seventy-five minutes between 5:45 and 7:00 p.m. were blocked off on my schedule on Thursday, October 10. And while it was still nine days away, that was nine days I had to be an anxious mess. And man, was I nervous.

On the afternoon of the 10th, then — a somewhat cool and overcast Thursday — my wife (Barb, thank goodness, came along as moral support) and I sat in the lobby of our New York hotel, while I nursed a beer and nervously bounced my knee up and down. The Daily Show takes good care of you from moment one, and a car came by the hotel to pick us up and whisk us away to their studios—one of those experiences where you’re excited at the idea of riding in an Actual Private Car — with a driver barking his estimated arrival time into a walkie talkie the entire way — but still vaguely embarassed that someone is holding a door open for you.

We were brought up to the back door — a blank door in a blank wall with no sign whatsoever of what was behind it — and met by Hillary, the producer for my segment, who escorted us down a little jog of a hall to an open door with a sign next to it that read BRIAN JAY JONES.  Nice.

Next to the sign was the Green Room — which is actually not green at all, but rather a cozy, living room-like space with stuffed chairs and a comfy sofa where guests wait until needed — and here I was met by my editor Ryan Doherty, and the ever-patient, ever-present David Moench. Barb and I sank onto the couch in front of a large, hi-def television on which The Daily Show logo was visible. I bounced my knee again as I sat down, though a bit slower now, and we all chatted about what a surreal experience this was until I was taken away for a bit to go to makeup (mostly to reduce the glare off my bald head) and fitted with a remote microphone.

And suddenly, poking his head into the Green Room, was Jon Stewart.

My wife — a big fan — pointed and gasped. “No WAY!” she finally said, and Stewart laughed that quick high-pitched giggle of his and said, “YES WAY!”  We all shook hands and he stood with his arms folded as we chatted briefly for a few minutes — he was particularly fascinated by Jim’s memorial service, which he had recently viewed on YouTube. Then he disappeared to get to work.

We all watched the show on the hi-def TV in the Green Room. There was no noise, no sounds, no indication that a TV show was being taped anywhere in the building; we could almost have been sitting in our own living room.

Shortly after the second segment concluded, Hillary stood in the doorway and said, “Ready to go?” Acting much less nervous than I actually was, I followed her through a maze of corridors, each one darker than the next, until I was  standing with a dark curtain to my right and looking at Jon Stewart at his desk about ten feet in front of me. The desk was on a platform about a foot off the ground, and I was  considering the various ways I could miss that step and face plant on national television when Hillary jolted me back to the present. “He’s getting ready to introduce you,” she said matter-of-factly, like you hear Jon Stewart say your name every day. “When I say, ‘Go!’ you go — and have fun out there.”

Suddenly, I heard Jon Stewart — Jon freaking Stewart! — saying my name, Hillary said, ‘Go!’ and out I went. The music played, the audience applauded, and I didn’t miss the step. Then I shook Jon Stewart’s hand and sat down. And just like that, I was on The Daily Show.  No rehearsals, no walk-throughs; it’s a finely-tuned, well-oiled machine, and you’re doing it in real time, one take. Wow.

It took me just a split second to get going — the best advice Hillary had given me in our pre-interview conversation was, “Don’t be afraid to talk, and don’t worry about stepping on Jon while he’s talking. He loves guests who talk.”  — and it took me just a moment to realize why Stewart is a great interviewer: he doesn’t really ask questions. Instead, he throws out comments or a bit of a conversation starter, and then lets you take things where you will.

Somehow, once we started talking, I wasn’t nervous — and it was over almost before I knew it.  And have you seen that moment just after the  interview where Stewart puts his head down near the desk and he and the guest have a brief bit of a conversation? It’s actually a very clever way of ensuring the guest doesn’t start to bail out of their seat before the camera cuts away. Instead, Jon Stewart leans in and stage whispers, “That was great, thanks so much — you did a great job” –and you lean in to listen, straining to hear, which keeps you in the chair until the fade out.  Very smart.

After shaking his hand again, I stood up, and was steered back to the Green Room by Hillary, where we all watched the final piece, a nod to a departing long-time producer. Then we all said our goodbyes, and went back to the waiting car to be whisked away again.  All told, it took about 75 minutes, just as promised. They’re really, really good at this, and I had a really, really good time.

And now, here I am on The Daily Show with Jon Stewart — a once-in-a-lifetime moment that I’ll never forget.

One response to “Your Moment of Zen”