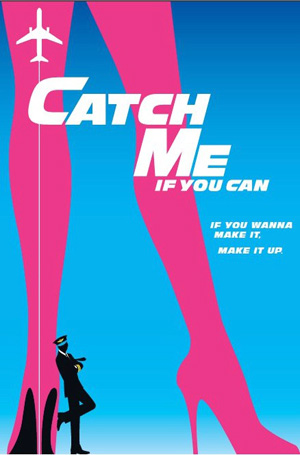 We were all a bit I disappointed in our house to learn that the Broadway show Catch Me If You Can — the musical based on the movie based on the book about “professional imposter” (if there is such a thing) Frank Abignale–would be closing after only 32 previews and 170 performances. What’s that? You didn’t know there was a musical based on the movie?  You’re not alone, apparently.  It’s not putting a satisfactory number of butts in the seats in New York, so they’re taking it on the road later in the year.  If it comes to a venue near you, catch it.

Barb, Madi and I were fortunate enough to catch one of the early performances at the Neil Simon Theater back in June, and we thought it was a heck of a lot of fun.  We saw it on  Saturday night, and the next evening, lead actor Norbert Leo Butz won a Tony Award for Best Actor in Musical. An obvious choice, really, for anyone who’s seen the show, as his number “Don’t Break The Rules” brings down the house.  Take a look for yourself — here he is performing it on Tony night:

Cool, huh? The next night, Butz came out for the curtain call and gave an impromptu little speech in which he praised his entire cast.  A classy guy — check him out:

From what I’ve read, reviews of the show — and word of mouth — weren’t positive enough to generate the kind of buzz that keeps shows running for a long time. It seemed to have the right pedigree: it was written by Terence McNally (Ragtime) with music and lyrics by the Hairspray team of Marc Shaiman and Scott Wittman. Still, I suppose I can see why some people might be perplexed by the show; it doesn’t really have a central romance or strong female lead–it’s sort of a buddy movie, one step removed–and apart from “Don’t Break The Rules,” which closes the first act, it doesn’t contain a big, banging closing number to shake the rafters.  But it’s got plenty of that Mad Men, 60s-era cool about it, and we really enjoyed it.  I’m sorry it’s not being given more of a chance.

Comments Off on Missed Catch

Tagged Catch Me If You Can, Tony Award winners