The gynormous Blizzard of 2010 has officially been clear of the region for a little less than a week — gone, but not by a long shot forgotten.  Roads are relatively clear — unless you live in the District of Columbia or an isolated cul-de-sac — grocery stores are restocked, and mail delivery has resumed (an overnight mail package I took the Post Office on Tuesday the 9th finally made it to its destination on Friday the 12th — it was stuck on the East Coast for two days while mail delivery ground to a halt).  But it’s still a mess, and temperatures in the low 30s are making sure that none of the enormous drifts will thaw until April.

Here’s a quick look at the storm as it moved through our region the week of February 8.  First, here’s a look out our back door as the blizzard really started to kick into overdrive (you can juuuust see the Jeep poking up behind a drift in the center of the photo).  We deliberately left the storm door open so the drifts wouldn’t pile up against it and make it impossible to open: 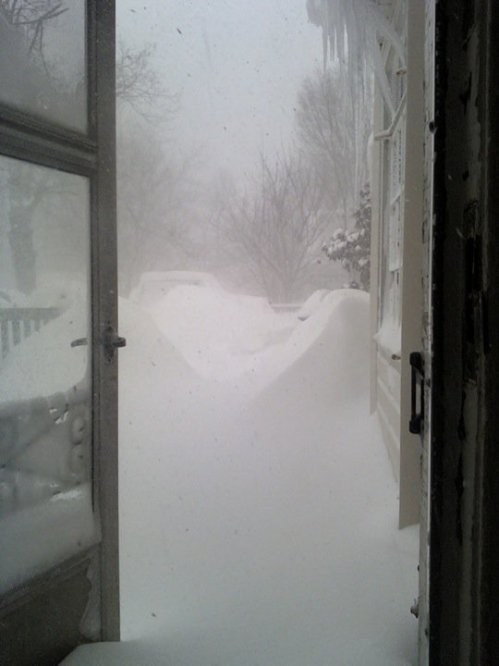 Here’s the same view a day or so later, after we spent the better part of the morning shovelling our way out to the Jeep:

While we got the Jeep uncovered, it wasn’t going anywhere fast.  It took us another day to get our long sloping driveway cleared. High winds and drifts as high as eight feet made it difficult to dig into.  We eventually settled on a system where Madi climbed the drifts and knocked them down with a shovel while I ran a snowblower right behind her.

Here’s the driveway now — and it’s hard to get a grasp of scale here.  The side drifts run from about two to six feet high as you move down toward the street.  Steering down our driveway is like making a Death Star trench run in an X-wing fighter:

Here’s a look back the other way, toward the rear of the house, glittering with icicles.  Sliding snow and heavy icicles actually tore the gutters right off of one part of the house.  Right after we took this, Madi and I spent some time slinging snowballs at the icicles on the upper level, trying to break them off.  We mostly just left snowy splatters on the windows and walls:

Finally, I’ve gotta run an Abbey photo (yeah, she’s still hobbling around, but loves the snow).  Here she is poking happily around in the dog run we keep digging out just off the back patio: 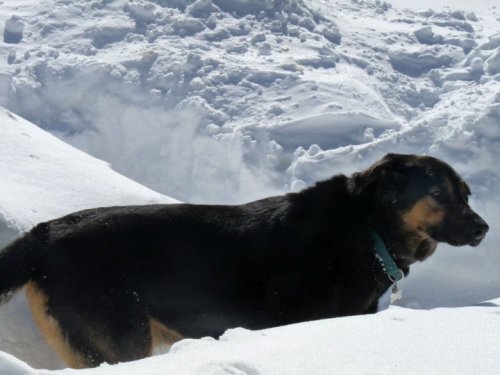 I love the snow, but even I’m a bit snow-weary.

This entry was posted in Abbey, snow and tagged dogs, snow. Bookmark the permalink.