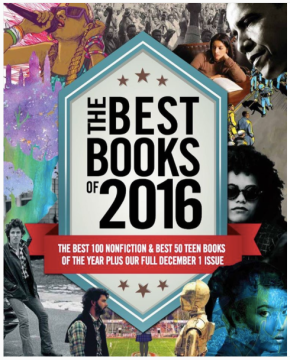 rge Lucas: A Life finally comes out this Tuesday — and I can’t wait for this one to get into your hands and hear what you think. So far, those who’ve had an early look at it seem to like it.  Kirkus Reviews — as reported back here — gave it one of their coveted starred reviews, as did Booklist.  I was also thrilled to learn that Kirkus named it one of their Best Books of 2016 — you can see Lucas and Threepio anchoring the front cover of Kirkus‘s December issue over there at right. All in all, pretty nice.

Oh, and it’s also been nicely reviewed in The Washington Post and BookPage, selected as a Book of the Month by Amazon, spotlighted in USA Today, Parade, the San Francisco Chronicle, the London Daily Mail, and featured on websites like Bustle and Cultured Vultures. Thanks for the kind words, folks.

Lots more to follow in the coming days — I’ll be at the Louisville Free Library on December 13, and having fun on podcasts like Channel Star Wars, Star Wars 7×7, and Coffee With Kenobi, for instance — and I’ll do my best to keep you posted.  Thanks for your enthusiasm so far. I appreciate it.