Reviews in Brief: The Beatles Off The Record (Keith Badman)

Posted on January 30, 2009 | Comments Off on Reviews in Brief: The Beatles Off The Record (Keith Badman) 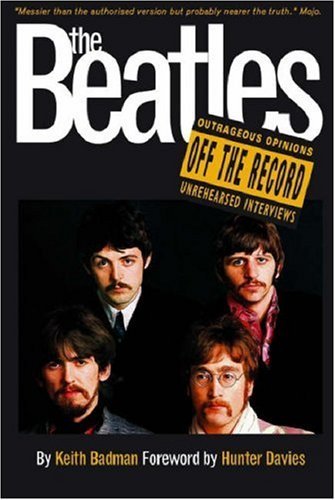 Keith Badman’s book is a terrific primary source — but it’s definitely not for those who are unfamiliar with the Beatles and their story. This isn’t a biography per se; it’s transcriptions of interviews with the boys and those around them, snippets of news releases and news stories, and transcribed appearances on television or radio shows, all presented in roughly chronological order. Badman provides (rightly) only a minimal guiding track, stepping in only to gloss a name or straighten out a disparity in dates. What he won’t do is try to straighten out or explain events or stories, because — with the advantage of hindsight — watching the key players try to explain everything themselves is part of what makes this so fascinating.

Even if you’re a hardcore Beatles fan, you’ll probably still find something in Badman’s book that’s new to you. For one thing, you’ll get a better feel for the kind of mind-numbing, eye-glazing interviews the Boys had to sit through, especially early in their career. We’ve all seen the interviews compressed to their soundbites for documentaries, but Badham lets us see what gets edited out in the interest of time — mainly one stupid question after another (“Do you get dandruff with all that hair?”) which the Beatles, for the most part, answer gamely until around 1966, when John Lennon finally unloads on a reporter for asking “What do you want to do when you grow up?” (“Why are you being so horrid?” one reporter sulkily asks Lennon afterwards.)

But it’s not just the media that bumbles through interviews; sometimes the Beatles do, too. I was surprised by how non-responsive or rambling their answers could sometimes be — particularly from Paul McCartney, who could obviously make his charm go a long way, but when you read his remarks on the page without the corresponding images, they don’t always make a lot of sense. You can also see the Boys reverting to “talking points” for many questions, answering questions the same way, even when cornered individually.

Badman also reproduces several documents I’d never seen before: the original lyrics for “Yesterday” (as “Scrambled Eggs”), filed when Paul was simply trying to get the song down on paper with placeholder words; the various press releases from Apple as the wheels were coming off (and when is someone going to write a history of Apple?); a snippet from a 1969 newspaper floating John Lennon as the lead role in the upcoming Jesus Christ, Superstar.

Finally, reading interviews and press releases from That Moment In Time — when they had no way of knowing what was coming — the end of the Beatles really isn’t all that obvious. All four of them continue to speak relatively well of each other in interviews (except for George when speaking of Paul) and indicate that they are still interested in working together if the right project comes along. It’s no wonder fans were so shocked when McCartney finally announced he was leaving the group (months after Lennon had already privately left) — there was little indication of disarray or disagreement in the press, not even from the Beatles themselves.

There are places in the book where some interviews or television appearances have obviously been misheard or transcribed incorrectly (at one point, someone describes a crowd of people at an airport as looking like “a sea of hands” from above, when it was probably “sea of ants”) but such errors are easy to overlook in this goldmine of a Beatles book. Highly recommended — but, again, not for those who are unfamiliar with the Beatles story going into it.

Comments Off on Reviews in Brief: The Beatles Off The Record (Keith Badman)