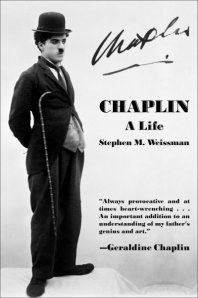 I’m normally wary of biographies that attempt to put their chosen subject “on the couch.”   I know it’s tempting, when writing about artists, writers, or other creative people  to try to view their work through the gauze of life experience, explaining their art in the context of childhood traumas, distant parents, or failed relationships.  There are some no-brainers out there, certainly — one could hardly write about Edgar Allan Poe or Vincent Van Gogh, to name only two, without looking into inner demons that ended up screaming at the public from the page or canvas.

It gets harder, however, with figures that, for the most part, aren’t quite as haunted or tormented. But that doesn’t mean biographers haven’t tried.   Some Disney biographers, for example, have claimed that Walt Disney obviously had a contempt for women and deep-seated abandonment issues, since several of his early films featured evil mother-figures or mothers who are dead or otherwise unavailable.  It doesn’t matter that Disney’s own life story doesn’t really seem to bear that out; once you’ve got him on the couch, you can use his body of work to explain away anything.  That was the sort of thing that nearly ruined David Michaelis’s otherwise dynamite Schulz and Peanuts for me — Michaelis tried, I thought, a bit too hard to use the Peanuts strip to explain Schulz’s psyche.  It was a valiant effort, but I just didn’t buy it.

And that, ultimately, is my problem with On The Couch biographies:  I don’t like being told that every inch of an artist’s output — whether it’s on film, on audiotape, on canvas, or on the printed page — is a channeling of some remote glob of their psyche, or reflects a subconscious effort to work out some personal issue.  I  believe you can understand an artist’s life by looking at his work; it’s more difficult and dangerous, however, to try to use an artist’s work to explain away an artist’s life.  Ideally, one must view the artist through the prism of both the life and the art together.

That’s a roundabout way of saying that I was skeptical of Dr. Stephen Weissman’s Chaplin: A Life. It’s true that Chaplin, with his mess of a private life and in-your-face politics, practically begs his biographers to put him on the sofa — a challenge to which Chaplin biographer David Robinson all but explicitly refused to rise.  But on the other hand, I did not want to be told that every Chaplin film was merely another psychological exercise in which Charlie either consciously or subconsciously tried to come to terms with some childhood trauma.

Well.  In his first chapter, Weissman — a for real psychiatrist, and not just playing one on TV — immediately put such concerns to rest.  Reading every Chaplin film or sketch as a therapy session, says Weissman,

“. . . does little to advance our undertstanding of how the creative process operated . . . It assumes that the comic mind operates as a seething id-cauldron automatically transforming childhood fears into schoolboy gags which are periodically belched and farted up from the steamy depths of the unconscious.”

Bingo.  That’s exactly what I wanted to hear — and that’s precisely why Weissman’s book works so spectacularly well.  Weissman doesn’t explain away every moment on film in psychological terms;  rather, he helps the reader understand why Chaplin makes particular comedic or artistic decisions, and where in his art Chaplin has borrowed or paid homage to his parents, mentors, rivals, and the London stage.

Weissman is particularly convincing in helping the reader understand some of the broader themes of Chaplin’s work — a particularly high point is his examination of City Lights as an opportunity for Chaplin to, at last, redeem both his mother and his father.  But what’s important is that Weissman isn’t trying to tell us that Chaplin did all these things as an act of psychic cleansing; rather, he’s helping us see where life experience has influenced some of the artistic decisions Chaplin made.

Further he doesn’t get you in the weeds on psychobabble; Weissman’s language is real, and readable — no long ramblings on Freud or lectures on id suppression or whatever.  His themes are larger than that, which is why you’ll find them more thought provoking — and even where you don’t agree, he hasn’t become so mind-numbingly technical that you think he’s overreaching.  Weissman’s so agreeable, in fact, that it’s like watching Chaplin’s movies with a good friend who’s got a particular insight into a film and doesn’t mind at all if you disagree with him.  Enjoy the film anyway, Weissman would probably say.

In a lively afterword, Weissman also does something no other Chaplin biographer has yet done: he’s dared to accept an extended 1915 interview — later published as Charlie Chaplin’s Own Story before being squashed and disavowed by Chaplin — as a reliable text.  It’s a primary source detective story, and Weissman will tell you convincingly why he believes biographers, and readers, can believe it . . . even when Chaplin himself tries to tell you otherwise.

As usual, I’d be remiss if I didn’t mention that you can read more at Dr. Weissman’s website at www.chaplinalife.com — along with lots of interesting essays, photos, and bits of film.

3 responses to “Reviews in Brief: Chaplin: A Life (Weissman)”