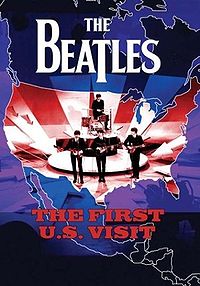 In February 1964, documentarians Albert and Donald Maysles were given an unprecedented amount of access to film and record a phenomenon that had much of America at first scratching its head in curiosity, and then screaming along with the rest of the world — a cheeky British rock group called The Beatles, who were making their first, short sprint across the eastern seaboard of the United States.

Content to let the camera act as impartial observer and generally stay out of the Fabs’ way, what the Maysles’ capture is nothing short of fascinating — a snapshot of one of the most important moments in rock history:  Tens of thousands of screaming girls. Dopey hangers-on. Baffled reporters. And four extremely talented musicians who seem rather unfazed by it all.

While you may likely have seen some of this footage in Anthology or The Compleat Beatles, seeing it for the first time in its complete, raw context is an eye-opener for even the most world-weary Beatles fan.   It’s not quite the Beatles “with their trousers off” (as John Lennon once described Let It Be), but it’s definitely the Beatles with their guards down — and we’re all the better for it.

The Maysles’ footage was eventually shelved by United Artists in favor of the faux documentary A Hard Day’s Night, but comparisons with that film are unavoidable.  As a documentary, it’s the less-idealized version of what ended up in Richard Lester’s jaunty film — but the Beatles in real life aren’t quite the iconic stereotypes that Lester and screenwriter Alun Owen created for the Boys’ on-screen personas (as John Lennon once said derisively of Hard Day’s Night:  “Paul, cute; me, witty…”).  In fact, when you’ve got them in Maysles’ lens, unedited and unscripted, you’ll see that McCartney already looks to be the most business-minded and PR-savvy of the Beatles, while Lennon . . . well, Lennon looks both bored and terrified at the same time, a far cry from the bold, tart-tongued Fab of A Hard Day’s Night.

Just as interesting is seeing the supposedly impartial and skeptical members of the press fall all over themselves, suddenly captivated by the charisma of the four young men they’ve been assigned to tailgate.  The Beatles all but work their wills on the press during the train rides to and from Washington, D.C., while New York deejay Murray the K makes a cringe-worthy spectacle of himself, gushing dopily over the boys even as he tries to paint himself a hipster who truly “gets” the Beatles.

The film cries out for narration at some points (watching it with commentary makes it a completely different and even more entertaining film) but the footage is always clear, and the sound is surprisingly crisp (and Maysles will tell you how he did it in the commentary).  Through it all, what shines through the most is the charm, talent — and, at times, a warm patience — of four young men who were rapidly becoming the most famous band in the world.  Great stuff.

For a taste of what you can expect, here are the opening moments of the Maysles’ film — with the familiar first press conference, some unguarded moments in the car, phone calls to Murray the K to request songs on the radio, and late night hotel chatter:

This entry was posted in Beatles, reviews in brief and tagged Beatles. Bookmark the permalink.