A Hint, and Scent, of Autumn

As I was driving along one of the rural, two-lane state highways that we use to get around in our corner of Maryland, I noticed a few trees starting to change color.  Nothing splashy or flashy yet — no explosive reds or oranges — but some yellowing at the corners, and a bit of browning.  It doesn’t seem like it’s time to make the turn into fall, and yet it really is mid-September.

Apart from the leaves, though, there are several sure signs it’s really autumn — and depending on where you live, there are probably certain smells that let you know that fall is really here.   For some, fall means the smell of hot apple cider or the scent of roasted chestnuts, baking pies, or the sweet smoke of a fire.

Growing up in New Mexico, it was nearly impossible to step outside in September and not smell them .  On practically every street corner, you would find a makeshift stand set up where you could buy green chiles (and if you’re a real New Mexican, you would always ask if they were from Hatch, New Mexico) by the bag or the pound or the bushel. 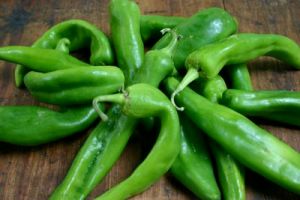 By themselves, green chiles are beautiful: shiny and green, with bent stems, and maybe a hint of red creeping down the sides.  Press your nose to one, and you can smell its potential — a hot, sweet, spicy smell.  But that’s not why we love them so much.

The real magic is in the roasting — and we take roasting very seriously.  While roasters nowadays are a bit fancier and built specifically for chile roasting, back in the 1970s, they were a feat of functional engineering.  As a kid growing up in Albuquerque, I would watch the chile vendors in front of the Eu-Can Bowl bowling alley, who always had the loudest roasters I’d ever heard.  They were made from oil drums, mounted sideways on a metal frame, with a handle welded to one end of the barrel.  Each barrel had an opening cut into it, which was then covered with a mesh-screen door.

Once you bought your chiles, the vendor would open the door, dump in the chiles, then fire up a gas burner directly beneath the barrel.  With the gas flames raging, he would then crank the barrel round and round by the handle, rolling the chiles around in the barrel, roasting them over the flames.

Ask any New Mexican about our weakness for green chiles, and we’ll likely all tell you the same thing: it’s not just the heat — you can get that from a jalapeno, for cryin’ out loud — it’s the flavor.  Green chile has a distinct taste to it, hot, yes, but also slightly sweet, with a smoky tang to it.  When chile is roasting, we’ll stand in the smoke, breathing deeply and letting the aroma soak into our clothes.  It tastes, and smells, like nothing else.

Now that I live in Maryland, green chiles are hard to come by.  You can buy them canned in the store, but,as I’m sure I don’t need to tell you, they really don’t compare. Fortunately, it’s still possible to get fresh roasted chiles — if you know where to look.

Each year, the Washington DC branch of the University of New Mexico Alumni Association hosts its annual chile roast at a farm deep in central Maryland.  They bring in over a ton of fresh green chile — right out of Hatch, New Mexico, naturally — and set up roasters.  Like so: 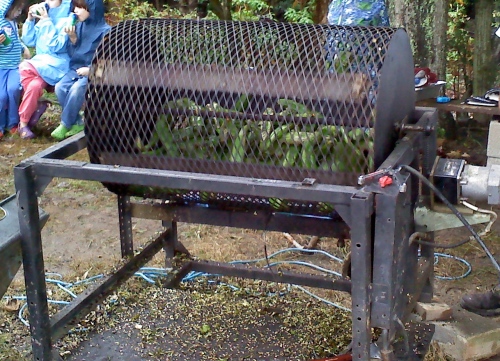 I left with four delicious-smelling ten-pound bags, which I put in a large cooler to further stew while I made the 90-minute drive back home (the stewing makes the peels slide easily off the chile) When I got home, Madi and I sat on the back patio and peeled chiles for an hour, wearing gloves to keep the seeds from burning our skin.  The smell permeated our clothes but, to Madi’s disappointment, the rubber gloves kept the scent off our hands.

Our freezer is now crammed with forty pounds of roasted chile.  In keeping with tradition, come early October, I’ll be making an enormous pot of green chile stew, a New Mexico staple — and a sure sign that fall, at last, is officially here.

This entry was posted in Uncategorized and tagged green chile. Bookmark the permalink.

2 responses to “A Hint, and Scent, of Autumn”