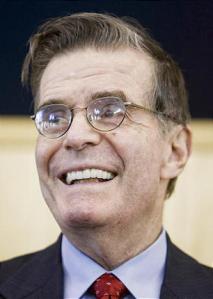 Ted Sorensen — Presidential adviser, ghostwriter, biographer, and perhaps the finest political speechwriter in modern times — passed away yesterday at the age of 82. There’s a nice piece on him in The Boston Globe right here.

Sorensen — who often joked that his last name would be misspelled as “Sorenson” in his obituary (it wasn’t) — was not only one of the guiding hands behind Kennedy’s famous inaugural speech, but also collaborated on Kennedy’s Pulitzer Prize-winning Profiles in Courage. He was a classy guy who treated his work as a speechwriter and ghostwriter exactly the way one should: when asked which turns of phrase he was responsible for, Sorensen always deferred to his boss —

Is the author the person who did much of the research and helped choose the words in many of its sentences, or is the author the person who decided the substance, structure, and theme of the book; read and revised each draft; inspired, constructed, and improved the work? Like JFK’s speeches, ‘Profiles in Courage’ was a collaboration. . . I know exactly where the credit ultimately lies — with JFK.

Sorensen was also one of the first biographers of Kennedy, publishing Kennedy in 1965.

I’m sorry he’s gone, but I’m sure glad he was here.  You probably didn’t know his name or his face, but you definitely knew his words.