I’ve had a wonderfully busy couple of weeks. In mid-May, I spent several days in New York City attending BIO’s Fourth Annual Compleat Biographers Conference, though attending seems a bit too weak of a word to describe what a terrific time I had. Here are a few highlights of my long weekend:

(1) Watching Janet Reid, Sarah Weinman, and Jennifer Richards enthrall a packed room with advice and tales of successfully (and unsuccessfully!) using social media — and gamely carrying on as if nothing had happened when the lights suddenly went out over their heads.

(2) Sitting on a panel with the remarkable Amanda Foreman, who was shot right out of a cannon and had the audience eating out of her hand with one funny story after another — and I had to follow her. Yikes.

(3) Listening to Pulitzer Prize winner Ron Chernow speak at lunch about the importance of listening to the silences in your subject’s story.  Your role as a biographer, he said, “is not to see what’s there . . . but what’s missing.”  Beautifully put.

(4) Moderating a lively panel on the the future of biography and publishing, with two crack agents and two crack editors — including my own agent and editor –participating enthusiastically and knocking it out of the park. Despite everything you might hear, print isn’t dead, or even dying — but it’s got to willingly share its space. 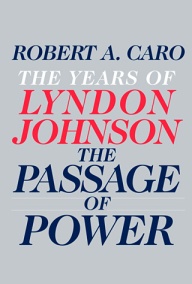 (5) Introducing BIO’s first ever Plutarch Award, given to the year’s best biography, as chosen by biographers. I’m really proud of this one — I sat ex officio on the committee that chose the ten nominees that would be sent to BIO members for their vote, and had the pleasure of coordinating the awards ceremony for the Saturday evening reception. The winner of the first Plutarch — as selected by BIO’s members — was the fourth volume in Robert Caro’s massive biography of Lyndon Johnson, The Passage of Power.

While Caro couldn’t be there himself — he was off doing the research for the next volume in his series (which he joked was “volume five in a four volume series”) — his longtime editor at Knopf, Katherine Hourigan, accepted on his behalf.

(6) Meeting the incredibly modest and friendly Tom Reiss, whose The Black Count won the 2013 Pulitzer for biography.  Tom was probably one of the most photographed people at the conference (heck, I have a photo with him, and I hate having my picture taken!) and he was always patient, generous, and genuinely interested in talking with everyone. A class act all around.

All in all, a successful weekend — and we’re already in the early planning stages for next year.

When I returned from New York, I had a week left to finish going through the galleys for Jim Henson. Fittingly, perhaps, I made my changes and notes in Kermit-green ink, and shipped everything back three days early. As a result, yesterday I got in the mail from Random House a heavy box full of these: 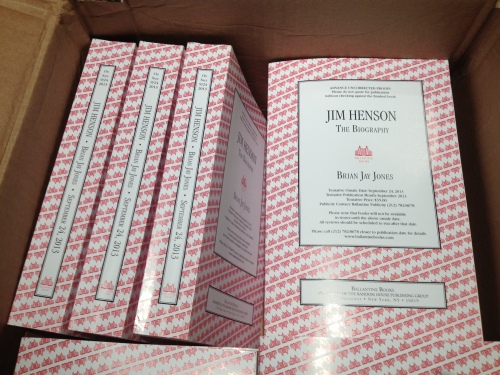 These are the advance uncorrected proofs that will go out for review.  There’s still  no cover for it, and the photo insert is being finished off as well. But as my editor wrote in his cover note, “It’s nearly a book.” And it is indeed.

This entry was posted in BIO, Jim Henson, Muppets, works in progress. Bookmark the permalink.