I was up late last night, doing The Jim Bohannon Show live in studio from downtown Washington, DC. I’m a fan from way back — when I was working as the night editor of my college newspaper back in the late 1980s, I would come back to my dorm room in the early morning hours and listen to him when he was sitting in for Larry King — and it was lot of fun to talk Jim Henson with him for a full hour.  If you missed it, the entire show is available right here (you’ll have to forward to the appropriate spot — I don’t come in until after the first hour.) It was such a good time, in fact, that I hardly minded getting snarled in traffic as I made my way out of Georgetown on a Friday night.

That was the exclamation point on a fun and exhausting week.  I spent most of Thursday and Friday on the phone doing interviews for places like Chicago, Wisconsin, Mississippi, and New Mexico — some of which I’ll link to when they’re posted, if you’d like to listen — and so far, I’ve managed to keep my voice and haven’t faded into a Bill Clintonesque rasp.  So far.

As advertised here earlier, I also had the pleasure of taking about Jim on The Diane Rehm Show (also taped right here in DC), with a generous assist from Dave Goelz, who phoned in from California.  To my delight (I’m easily thrilled), I even got to wear headphones while sitting in the studio, and only got a slight stare from guest host Susan Page when I did my Ringo Starr impression and asked it they could “turn  it down in my cans a bit.”

Anyway, if you missed me — and Dave — on Diane Rehm, you can listen to the show right here.

Finally, on Wednesday morning, I was pleased to be included in a piece on CBS This Morning about the Henson family’s donation of 20 Muppets to the Smithsonian Museum of American History.  Miss it? Here you go.

All in all, it’s been a terrific week — and the coming week will be even busier (and just as much fun) as I make the trip to New York for talks at the Museum of the Moving Image on October 1, and the 92Y on October 2. If you’re in New York, come on by. It’ll be fun. I promise.

Jim Henson (and Rachel Syme and Me) at the 92Y 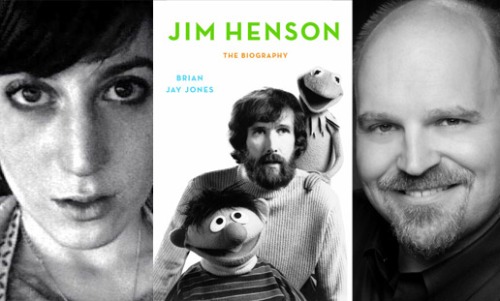 Mark your calendars now for what’s certain to be a fun event — provided you’re in the New York area, and I hope you will be, because this is a good one.

On Tuesday, October 2, at 7 p.m., I’ll be sitting with Rachel Syme for her On Biography program at the 92Y. We’ll be talking Jim and the Muppets, as well as the craft of biography — and Rachel already promised on Twitter to dress as Miss Piggy, so there’s that, too.*

This is one of the most prestigious venues in New York — take a quick peek at their website and try to keep your mouth from hanging open as you look at all the cool people participating in various events and functions  — and I’m beyond honored to have been asked to participate.

* We won’t actually hold her to that.