Breakfast (and Lunch) of Champions

Posted on February 9, 2011 | Comments Off on Breakfast (and Lunch) of Champions

There’s something else I’ve come to love about biography: biographers.  Last week, Barb and I had a wonderful Indian dinner in DC with Charles J. Shields and his lovely wife Guadalupe, who had braved bad weather and slick roads to attend the Association of Writers & Writing Programs conference. It was a terrific time, with good food and even better company — and I’m even more excited now about getting my hands on Charles’ upcoming biography of Kurt Vonnegut, which his publisher, Henry Holt,  is rightly making its Christmas 2011 centerpiece bio. 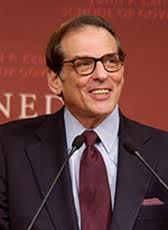 Speaking of top-notch biographers, the Biographers International Organization recently announced that its recipient for the 2011 BIO award — which also means its keynote lunch speaker for this year’s conference here in DC — will be Robert Caro.

Yes, you heard me — and forgive me for being crass here, but — ROBERT EFFING CARO. If there’s a Mount Rushmore of Biographers, he’s on it.  If there’s a Beatles of Biographers, he’s John Lennon. A two-time winner of the Pulitzer Prize, his comprehensive, multi-part biography of President Lyndon Johnson stands — in my view, at least — as the ultimate example of what great biography should be: thorough without being mind-numbing, dramatic without being histrionic, and scholarly without being pedantic. (I’ve described my favorite book of his, the third volume of his Lyndon Johnson biography, Master of the Senate, as a biographical thriller.)

We’re less than a hundred days away from the 2011 BIO conference, and slots — as well as hotel rooms — are filling quickly, so if you’re interested in attending, click here for complete information.  As a member of the Washington Biography Group, which is serving as this year’s host, I’ll be moderating one panel, but I’ll also be participating as a panelist during the session on “The Role for Fiction in Biography.” Plus, it’s your chance to see Robert Effing Caro live and in person, which is more than enough, really.

Last year’s conference was hugely successful, and a lot of fun.  And you don’t have to be a biographer or even a writer to attend. Just loving books is more than enough.

Comments Off on Breakfast (and Lunch) of Champions

A Blast From The Past: The Midnight Conference

The other day, I received a nice e-mail from Rob Dale at AmDale Media, the fellow who puts together the Comic Fanzine Price Guide. Through a bit of clever detective work, Rob discovered that, back in the late 1980s, I used to write for a Batman-related fanzine called The Midnight Conference (TMC), and would I mind providing a little insight about the ‘zine?

Well, sure.  In those heady days before Batman was ever a money-printing movie franchise, there was The Midnight Conference, a  fanzine produced by a pleasant fellow from Canada named Martin R. Noreau, who printed and distributed the mag mostly out of affection for a character he loved.  I doubt the thing ever made a nickel, but Martin diligently put out the mag for a couple of years, typing up each issue and pasting in drawings, then photocopying, binding and mailing the thing.  This was in the days before computers made things like formatting and typesetting as simple as changing a setting in the template or selecting  a different typeface, and while it wasn’t exactly bearskins and buck knives, it was pretty close.

Eventually the production got large enough that Martin needed a bit of help, so he tapped the pseudonymous lettercol phenom T.M. Maple — who seemed to have a thoughtful letter in nearly every comic book published in the 1980s — to act as his assistant editor.  TMC lasted until the late 1980s, when Warner was preparing to put out the first Batman movie — you know, the one with Michael Keaton and directed by Tim Burton, which we all groaned about until we actually saw it and decided it was pretty darn cool —  and, allegedly, the Powers That Be at Warner issued poor Martin a cease and desist letter in the name of protecting their copyright. That was pretty much it for TMC.  It folded after thirteen issues. (Meanwhile, T.M. Maple — whose real name was Jim Burke — died of a heart attack shortly thereafter at age 38.  He was a thoughtful guy who genuinely loved comics and couldn’t understand why they didn’t have a more mainstream acceptance. I wonder what he would think about the medium and characters he loved now.)

I was the regular reviewer for the Batman comic for seven issues of TMC. It’s not work I’m particularly proud of — I was still in college, still feeling my way with voice, and when I go back and re-read those pieces now, they bury the needle when it comes to the cringe factor. Yet, I did take the job seriously, banging out what I thought were really thoughtful critiques of Jim Starlin’s take on the character, or discussing whether the art in a particular sequence was helping the narrative. Mostly, though, I was just trying too hard.

Still, from time to time, I scored a coup or two.  For one issue, I managed to nab an interview with writer Steve Englehart, who wrote what many — myself included — still consider one of the finest story arcs in the character’s eighty year history.  Another time, I collared MAD magazine artist Sergio Aragones and paid him twenty bucks to produce a drawing of the Dynamic Duo to use as the cover on what turned out to be TMC’s final issue in late 1988.  Wanna see?  Here you go: 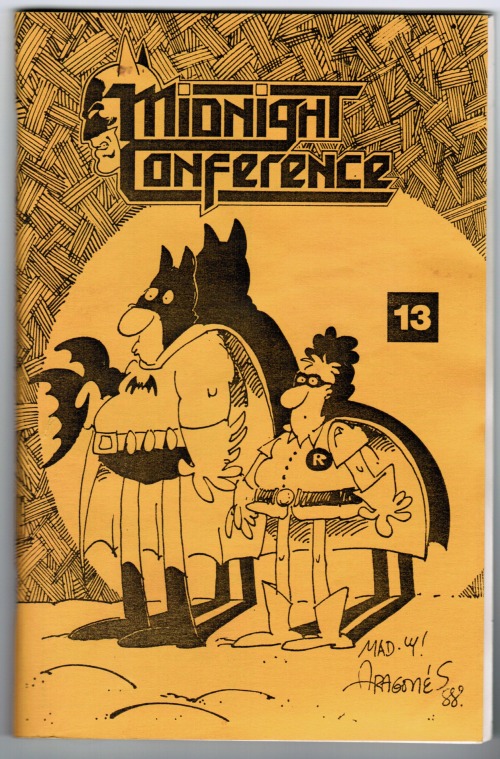 I still have the original black-and-white drawing on the bookshelf in my office. And let me add that Sergio was — and is — a super nice guy with a great sense of humor. He’s still going strong today at age 73. And for the record, this marks the only time I have ever appeared in anything with a great Aragones cover.

Posted in a bit of history, oh my god, The Midnight Conference

The newly-released issue of Rolling Stone names what its editors believe to be the top 500 rock and roll songs of all time — an ambitious task that’s certain to provoke debate and fistfights.  Lord knows I disagree with their choice for the greatest song ever — “Like a Rolling Stone” by Bob Dylan — but disagreements are part of what makes these kinds of lists so much fun to begin with. (Here’s the top five.)

While I might quibble with their pick for number one, I’m thrilled that the group with the most songs on the list — a total of 23 — is the Beatles.  Their highest-rated song is “Hey Jude” at number eight, with “Yesterday” clocking in at lucky number 13.  In fact, “Yesterday” still holds the record as the most recorded song in pop history.

Let’s take a peek at one of those versions right now, shall we?  Here’s “Yesterday” as it was meant to be done: by the VentriloChoir, a sea of ventriloquists and their dummies:

Have a good weekend!

Posted in Beatles, lists, oh my god, that'll give me nightmares

Posted on July 18, 2008 | Comments Off on Quis custodiet ipsos custodes?

Translation: Who watches the watchmen?

Posted in oh my god, squeeeeeeee, stuff i dig

I’m one of those who’s still skeptical of the ability of self-publishing and print-on-demand to really compete — meaning with a truly viable product — in the publishing industry. But I share Karp’s hope that a wider availability of materials will start to sway publishers toward higher-quality books, rather than their perpetual wooing of the latest flame.

An alternate view, courtesy of Bookslut, will run later this week.

Posted in oh my god, print on demand, publishing