Be A Part Of History, Wherever You Stand

If all goes as anticipated, one week from today — on January 20, 2009 — Washington, D.C., will swell with a record 4 million tourists, guests and V.I.Ps, all of whom have come to the area to attend the inaugural ceremonies for President-elect Barack Obama.

It’s going to be a mess.

Washington, D.C. is a place that’s used to managing and moving enormous crowds of people into and out of the District.  Every day, DC’s huge workforce — made up mainly of government workers, lobbyists, and advocates, most of whom don’t live in the city itself — commute from Maryland, Virginia, even Pennsylvania, West Virginia and Delaware, ballooning the population of the city from its normal 600,000 into the millions.  They — we — come in by car, by commuter train, by subway, and by bus.  We’re well used to sitting in traffic on the Beltway for hours or packing ourselves uncomfortably onto the Metro or commuter trains, our faces pressed against each others’ backs and our briefcases lost somewhere down by our feet.

We’re  a town that prides itself on elaborate public events, from Fourth of July celebrations to gigantic parades.  We’re used to the inconveniences that come from being the seat of government.  We hardly blink at protests or sit-ins, for example, or being waved across streets by heavily-armed soldiers in fatigues or Men in Black, out in force because of visiting heads of state.  We’re used to traffic being stopped to make way for caravans of black limousines, their windows tinted almost impossibly dark, sirens blaring, as Cabinet officials or the President make their way through the city.

All this we’re used to.  Still, we’re bracing ourselves for next Tuesday as a day unlike any we’ve ever seen.  Schools are closed for the day to keep buses off the roads.  The bridges crossing the Potomac from Virginia into DC will be closed to all but inaugural traffic — which means the countless shuttle buses that will pour into the city, looking for places to park.  Metro will run at capacity all day, but with its ability to move only 150,000 riders per hour, it may well take attendees all day to wait for their train.  In short, it’ll be a zoo.

And yet . . . when I’m contacted by friends from across the country who want to make a “quick trip” to DC to to take part in history, or just want to catch a glimpse of the new President, I just can’t discourage them.  While this is indeed a historic event, any Presidential inauguration is worth seeing.  Regardless of your political affiliation or who you may have voted for, it’s the chance to witness firsthand one of great miracles of  a republican form of government: the transfer of power — through the will of the people — to a new head of state.  And it’s truly thrilling.

I had the opportuity to attend the inaugural ceremonies for President Clinton’s first swearing in, on January 20, 1993.  At that time, I was working in the Senate and living on Capitol Hill at 4th and Constitution, just four short blocks from the U.S. Capitol.  I had secured my ticket through our office — while excitement for Clinton was high, the demand for inaugural tickets was nowhere near what it was for Obama — and on the morning of the 20th, my roommates and I walked over to the west side of the Capitol, where our tickets permitted us to stand in a cordoned off area at the northwest corner of the Capitol’s lawn.  Here’s the map on the back of the ticket to give you some perspective: 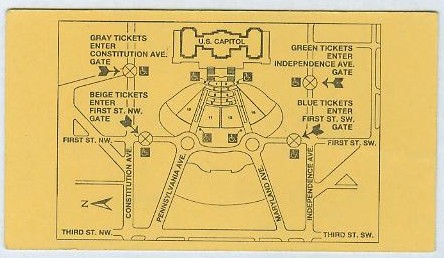 While that doesn’t appear to be too shabby, you need to appreciate just how huge the Capitol complex is.  Once you’re beyond the steps of the building and across the west lawn, you’re pretty far away.  I ended up standing right where Pennsylvania Avenue dead-ends at the low stone wall surrounding the Capitol, near one of the enormous Chinese lanterns that lights the entrance to the lawn.  From my position, here’s what I could see of Clinton’s swearing in on that morning in 1993: 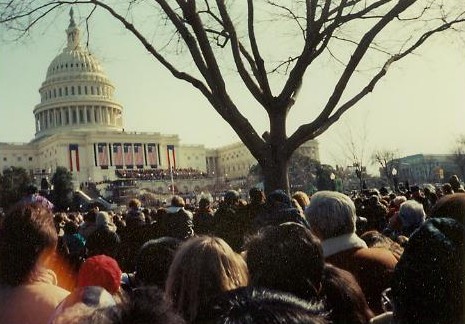 Clinton’s there, almost dead center of the photo, on that lower tier in front of the gray stone archways of the Capitol Building.  And that was my view from the exclusive ticketed area!

So here’s my advice, then, for those who are coming to our fair city for the inauguration:  please manage your expectations.  It’s going to be packed here.  If you’re in the city, you are a part of history, a part of the unique Obama story.  You may not be able to see the man — though there will be video screens propped up around the Mall so that you might be able to catch a glimpse of the proceedings even if you’re jammed onto Fifteenth Street NW, well away from the Mall.  Or maybe you’ll be standing at the foot of the Washington Monument — or near the Smithsonian Castle, or the Vietnam Veterans Memorial —  watching Obama take the oath of office on a huge video screen, but you can tell your children and grandchildren that you were there.

Also, give yourself time to get . . . well, anywhere.  Parking will be nonexistent, the Metro will be slow, and the sidewalks will be packed. Plus, while DC can often be confusing enough to navigate if you’ve never visited before, now add 1 million other confused folks, going down the wrong streets, the wrong escalators, the wrong way.

It’ll be a mess.  And while the travel planner in me might want to urge you to stay away, I can’t help but tell you to enjoy yourself, and relish your part in history, no matter where you’re standing — even if it’s in your own living room half a continent, or half a world, away.  This is you, and your government, at its finest.