I was hoping to put this up yesterday, but didn’t get the chance — on Wednesday, I had the pleasure of attending the signing ceremony in which Jane Henson formally presented a wonderful gift to the Smithsonian Institution’s National Museum of American History:  the entire Muppet cast of Sam and Friends.

Sam and Friends went on the air in the Washington, DC area — on WRC, our local NBC station — in May 1955.  It was initially a five-minute performance that aired after the local news, and became so popular that it was eventually given two high-profile spots in the WRC lineup, airing immediately before the highly-rated Huntley-Brinkley Report, and then several hours later before the rapidly-ascending Tonight Show.

The fact that Sam and Friends was Jim Henson’s springboard onto the national scene already makes it worthy of inclusion in the Smithsonian.  But Sam had more going for it than even that — for among its cast members was a milky-green puppet named Kermit.  He wasn’t a frog then, and wouldn’t be for several years. But his simple design gave him enormous versatility as a puppet, and he quickly became Henson’s go-to character.  Kermit would be revamped and overhauled in the coming years, eventually becoming (in Henson’s words) “frogified,” but the basic design held.  Take a look at him here, posing with Harry the Hipster on the left and Sam on the right (I snapped this with my camera phone, and I apologize in advance for its shakiness): 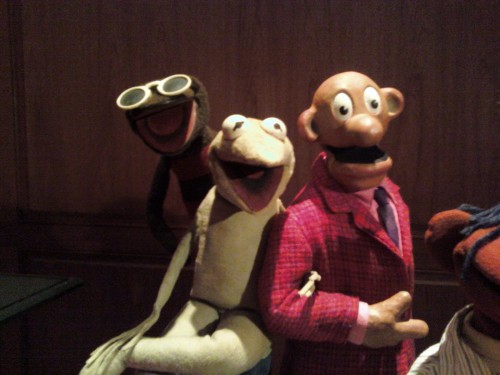 Despite their age — included in the collection is one of Henson’s very first puppets dating back to 1954, a rat named Pierre — the puppets are in beautiful shape, due to some careful restoring and first aid.  They’ll be put on display in the American History Museum in November, as part of the revamped (and incredibly popular) exhibit that includes the Ruby Slippers, Fonzie’s jacket, and Archie Bunker’s chair. (Do I have to explain any of those references?  I didn’t think so.)

Deservedly, there were great gobs of press there.  Here’s a great piece from the Associated Press, and its video piece is just below:

…and here’s a nice piece from NBC news — which, in a way, gets bragging rights.

Have a good weekend!