The Hills, The Stars, The Stacks of Wax

I’m sitting in front of the window in my fourteenth floor hotel room in Hollywood, overlooking Hollywood Hills, and it’s sunny and very springish outside, which makes me wish that the sudden touch of winter we had in Maryland earlier this week would finally just pack up and leave. While I can’t see the famous HOLLYWOOD sign from my window (thanks to the rest of the hotel looming up to my right) there’s no mistaking where I am.

The Hollywood Bowl is just over that hill, and the famous Magic Castle — official home of the Academy of Magic Arts — is the yellow building visible at center left, with the gray roof and turret. Oh, I also apparently forgot there’s some sort of formal awards ceremony going on this coming Sunday, which explains why the lobby of my hotel is bustling with people wearing name badges proclaiming them as part of an OSCAR SET-UP CREW. Who knew.

I arrived here yesterday with plenty of time to spare before my interview last evening, so I decided to walk over to Roscoe’s on Gower Street, which meant my footsteps took me right along the famous Hollywood Walk of Fame — which, as I think I’ve mentioned before, is both exciting and sort of depressing.  It’s fun to pick out the famous names as you stroll the sidewalk, but it’s a bit shocking to see stars for former heavy hitters like Gary Cooper or Katherine Hepburn gracing the pavement in front of a tattoo parlor — and it’s even more heartbreaking to hear someone say “I don’t even know who these people are!” as they step past the star for James Cagney.  (Okay, maybe you don’t know George Cukor, but James Cagney? )

Oh, and I did manage to find this one — which, I’m happy to say, was not in front of a tattoo parlor or cigarette shop:

Meanwhile, the Sinatra fan in me couldn’t resist snapping a quick shot of this famous building: 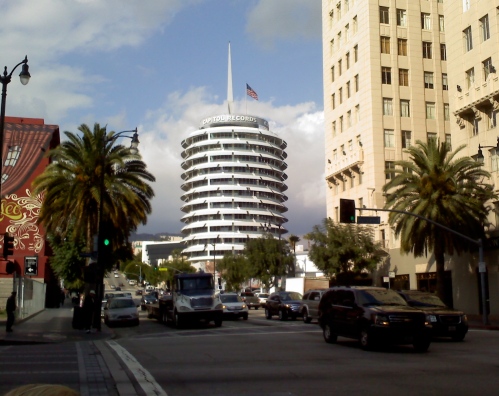 After stuffing myself on chicken and waffles, as promised, I made the much-needed long walk back to my hotel and spent the next few hours preparing for my interview.  While it seems that an interview should be easy — especially when you’re the one asking the questions — I like to go in prepared, so I spend time reading over my questions several times, making notes where I may need to clarify something, or making sure I have any materials handy that I might want to have my subject read or look at during our conversation. I also try to make sure the questions are in something that at least looks like a logical order so I don’t disorient them — or me — by jumping from topic to topic, though that’s always bound to happen once you get talking.

Finally, around 6:00 or so, I got into the rental car and drove down Sunset Boulevard, looking very much out of place in my Ford Focus as I headed for Beverly Hills. And I had a fantastic evening, with great conversation and even better company.

Today, it’s back to Jim Henson Studios over on La Brea.  Stay tuned.

This entry was posted in Capitol Records, Jim Henson, walk of fame, works in progress. Bookmark the permalink.