Category Archives: friends of the blog 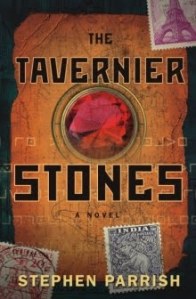 — the debut novel of my pal Stephen Parrish — hit bookstores this past Saturday. Stephen’s a deep-drill researcher with a passion for his subject (he’s got  degrees in both gemology and cartography, which makes him the Indiana Jones of jewelers), and his novel is sort of like Bones meets The Da Vinci Code:

When the well-preserved body of seventeenth-century mapmaker Johannes Cellarius floats to the surface of a bog in northern Germany, a 57-carat ruby clutched in his fist, the grisly discovery attracts the attention of criminals, crooks, and thugs across the globe. It ignites a deadly international treasure hunt to find the fabled Tavernier Stones, a stash that reputedly contains some of the world’s most notorious missing jewels, including the 280-carat Great Mogul Diamond and the 242-carat Great Table Diamond.

Congratulations to Stephen, who worked hard for this one.  You can order it here

, or hit his website, where he’ll steer you toward a bookseller near you.

Comments Off on …And One More, While I’m At It.

Posted in friends of the blog, Stephen Parrish 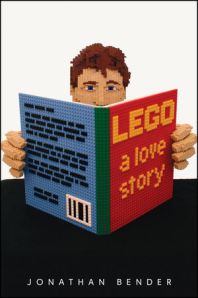 Congratulations to Lego addict (and fellow member of the Lyons Den) Jonathan Bender, on the release of his way-cool book LEGO: A Love Story. If you’ve been following Jonathan on his blog for the last few years (like I have), you know that he approached Lego as a sort of enthusiastic amateur, and developed the chops to become a master builder.  C’mon, how much fun does this sound? Check it out:

In search of answers and adventure, Jonathan Bender sets out to explore the quirky world of adult fans of LEGO (AFOLs) while becoming a builder himself. As he participates in challenges at fan conventions, searches for the largest private collection in the United States, and visits LEGO headquarters (where he was allowed into the top secret set vault), he finds his LEGO journey twinned with a second creative endeavor—to have a child. His two worlds intertwine as he awaits the outcome: Will he win a build competition or bring a new fan of LEGO into the world? Like every really good love story, this one has surprises—and a happy ending.

LEGO: A Love Story is available here, and you can even read some fun excerpts from it here.  Go get it.  While you do, I’m gonna go dig out all my old Lego space sets from the late 1970s, put them together, then attack them with my Raydeen Shogun warrior.  Just like the old days. My brother will vouch for me.

Posted in books, friends of the blog 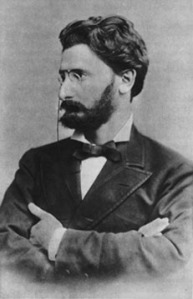 Last night, I had the great pleasure of attending a reception and book talk for James McGrath Morris’s Pulitzer: A Life in Politics, Print, and Power

down at American University (which, as it turns out, is also McGrath’s alma mater).

If you have the opportunity to see Jamie talk about Pulitzer, jump at it.  Last night, he gave a presentation that encompassed his research (which included the kind of tale biographers love — that of finding The Source That No One Else Has), Pulitzer’s longtime feud with Teddy Roosevelt, his treatment in and by the very press he had created, and the challenges of dealing with that early 20th century e-mail device known as the telegraph. Jamie puts on a show, working without notes, and talking so animatedly that it’s impossible not to get caught up in his excitement for his subject.

Jamie’s on a bit of a whirlwind tour right now (last night, even as he was finishing signing books, he was already getting ready to make the sprint to the airport to get to Connecticut), but there are plenty of places you can catch him.  If you’re interested in learning more about an icon whose name is more familiar that his face or life story — and hearing the story told well — go see James McGrath Morris. His tour schedule is right here. 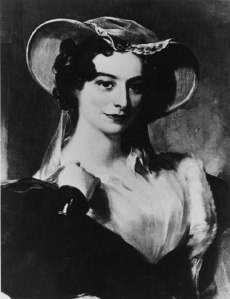 Claire Salisbury — who’s doing terrific work bringing to light the life and letters of the 19th century philanthropist Rebecca Gratz over on her blog,  Rebecca Gratz and 19th Century America — has two fun entries this week on a a good friend of Rebecca’s . . . an aspiring young writer named Washington Irving.

Irving and Gratz had an interesting and decidedly non-romantic relationship — one based on mutual respect, good conversation, and similar senses of humor.  In fact, there were times when Rebecca used Irving as a willing tool in thwarting the advances of suitors, much to the delight of both.

I’ll let Claire serve as your tour guide for these particular stories (she is, after all, a docent for the Rosenbach Museum and Library in Philadelphia, so you’re in good hands).  The two entries are here and here, and her full blog is here.  Over to you, Claire . . .

Posted in c blocked, friends of the blog, Washington Irving

It’s not quite Happy Launch Day — the book’s been Officially Out for a week now — but I attended the Launch Party last night in Georgetown, so I’ll say it anyway:  Happy Launch Day to David O. Stewart, whose Impeached: The Trial of President Andrew Johnson and the Fight for Lincoln’s Legacy

is already burning up the shelves and earning great reviews.  Here’s the feared Kirkus, for instance, which gave David one of those highly-coveted starred reviews:

“A riveting look at one of American history’s most dismal episodes. The [Johnson] impeachment spectacle qualifies as the last battle of the Civil War and the first act of the tawdry Gilded Age . . . Stewart demonstrates his legal acumen, explaining the constitutional bases for impeachment and teasing out “the tenacious opacity of the phrase ‘high crimes and misdemeanors’ . . . Also an adept historian, Stewart stresses the political nature of impeachment, where developments and outcome depend as much on events and the character and convictions of the protagonists. The author also profiles Benjamin Butler, the prosecution’s headstrong manager, the surprisingly slippery president-in-waiting, Ulysses S. Grant, and Edmund G. Ross, whose deciding vote against impeachment was likely purchased . . . Stewart vibrantly renders these atmospherics, the poisonous politics, the personal animosities and the unbridled corruption that will leave readers rooting for both sides to lose.  Likely to become the standard version of this historic clash between a president and Congress.”

Pretty nice, eh?  But really, I expected no less from Mr. Stewart,who’s not only a smart guy and a great writer, but a true gent.  Go get it.

Comments Off on Impeached!

My pal Scott Phillips wrote a great piece in his “Hollywood and Whine” column for the Eye Crave Network  about life in Hollywood as a spec screenplay writer, script polisher, and project pitcher.  As Scott puts it:

There’s no doubt about it — it’s exciting as hell: you, the struggling screenwriter, finally get lucky enough to have somehow stumbled onto the right combination of spec screenplay and hard-working manager or agent, and you find yourself “taking meetings” all over Tinsel Town. That’s when the Hollywood Hand-Off begins.

Go read it — and be sure to check out the pic of Scott with Gunnar “Leatherface” Hansen.  And some day soon, I’m hoping Scott’ll tell the story about a pitch meeting with Steven Seagal, even though you really need to hear Scott doing his Seagal impression to fully appreciate it.

Oh, and you are watching Scott’s TV show Kamen Rider Dragon Knight weekly on the CW aren’t you?

Posted in friends of the blog, Scott Phillips

officially hits the shelves in a bookstore near you today.  Heck, you can even get it on Kindle.  She’s also podcasting over on Fangs, Fur, and Fey this afternoon as well, so go listen.

Also, congratulations to the super-cool Jamie Ford, whose Hotel on the Corner of Bitter and Sweet

deservedly pole-vaulted its way onto the New York Times bestseller list this week, showing up at number fifteen.  And I’m sure it’ll make its way even higher.  Maybe now they’ll add the East Coast to his book tour so I can say hello to him over at Politics & Prose.

Meanwhile, you can continue to check out new episodes of Kamen Rider Dragon Knight every Saturday on the CW by my pal Scott Phillips — who’s also preparing a collection of short stories, Tales of Misery and Imagination, as well as working on a collaborative project with sci-fi writer Robert Vardeman.  Scott continues to be one of the most entertaining reads around, so swing by his blog and say hey.

Finally, congratulations to Josephine Damian, whose short story “Finished” was accepted for publication in the October issue of Yellow Mama.  Reserve a copy at your newstand now.  Don’t make JD come after you.

Posted in friends of the blog, Hotel on the Corner of Bitter and Sweet, Red-Headed Stepchild

It’s been a cold and windy week here in Maryland — made even colder by the little tease of Spring weather we’ve had over the past few weeks, where you can walk the dog, run to the store, or get the mail without needing your coat.  This week, though, just running from the house to the car makes your cheeks sting and your fingertips burn.  Each evening I build a fire in the living room fireplace and press my nose against the front window, staring at the dead flowerbeds and counting the weeks until I can go out and start playing in the mud again. 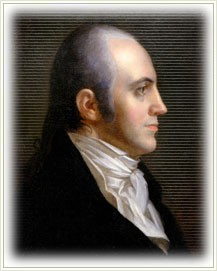 Meanwhile, I’m having lunch today with David O. Stewart, whose book The Summer of 1787 made the proceedings of the Constitutional Convention read like a great suspense novel.  David’s presently hard at work on a book about Aaron Burr and the comedy of errors that was the Burr Conspiracy, and he’s being either kind enough or crazy enough to ask me to blather on at length about Washington Irving and his relationship with Burr, and Irving’s observations as a semi-official correspondent at Burr’s trial in 1807.  Plus, David’s just plain good company, so it’s pretty much a double bonus for me.

Oh, and I’d be remiss if I didn’t mention that David’s latest book, Impeached: The Trial of President Andrew Johnson and the Fight for Lincoln’s Legacy hits bookstores on May 12.  You can advance order a copy here.

Posted in friends of the blog, Washington Irving

Friend O’The Blog Brian D. — who’s not only a pal, but one of those rare lawyers with a sense of humor — shot me a message regarding yesterday’s post about the Supreme Court’s “fleeting” profanity discussion that helps put some of the remarks in better context. Over to you, BD….

Reading today’s blog, curiosity got the best of me and I set out to find the transcript. As great as the Post article was, the reporter actually bungled it. In that exchange, Garre was actually conceding (for the moment) that if something is “funny” it may not be “shocking, titillating, or pandering” and therefore the FCC would consider that in not fining someone — which was the proper set up for Scalia’s joke.

JUSTICE STEVENS: Maybe I shouldn’t ask this, but is there ever appropriate for the Commission to take into consideration at all the question whether the particular remark was really hilarious, very, very funny? Some of these things —

JUSTICE STEVENS: — you can’t help but laugh at. Is that — is that a proper consideration, do you think?

JUSTICE SCALIA: Oh, it’s funny. I mean, bawdy jokes are okay if they are really good.

I’m with you — can’t wait to read the decision on this one.

Back to me again. I’m glad to see the Justices have a sense of humor about it, even as they continue their delicacy with language (it’s like the Monty Python sketch, where a group of politicians trying to come up with a new sin tax keep talking about taxing “thingy”). But I think it also brings up a good point that I hope they’ll keep in mind during their decision: context counts. I’m glad Stevens is questioning whether that deserves “proper consideration.”

Posted in friends of the blog, profanity, Supreme Court